Mega Bangyai & IKEA will be located close to the Outer Ring Road in the western part of Bangkok, directly opposite the new Central WestGate which is scheduled for opening in 2015. For those that don’t know, IKEA is a swedish home furnishings store. IKEA at Mega Bangna was the very first store in Thailand, it opened on the 3rd of November 2011.

Siam Future Development is challenging CPN with this new move. Mega Bangyai will include the popular IKEA store so there will be fierce competition for the customers. There is little doubt that having an IKEA store on board is a wise move. SF Development is probably best known for their many Avenue outdoor shopping malls, one of which is located on Second Road in Pattaya.

Two new stores under the Mega brand is planned, the other is Mega Rangsit and IKEA.

As usual Ikano Group is a partner in the project which will include department stores, supermarkets, cinemas, etc. Expect this development to be similar to Mega Bangna.

All three Mega stores will be located next to the Outer Ring Road encircling Bangkok.

They have chosen this area because it is the largest gateway to Bangkok on the western side of the city and because the new MRT Purple Line is expected to play a big role in the future development of this particular part of town.

In the long term MegaCity Bangyai is supposed to be expanded to include condominium towers, hotels and a convention center, in other words a new city is in the making. Central WestGate are having similar plans so it is only natural to expect that a lot of changes will be taking place in this area in the near future.

Construction of Mega Bangyai was expected to have started in 2014 with completion in 2015.

As of July 2014 they still have not started construction so it seems the project has been delayed. If there are no further delays Mega Bangyai will be opening in 2016 at the earliest. 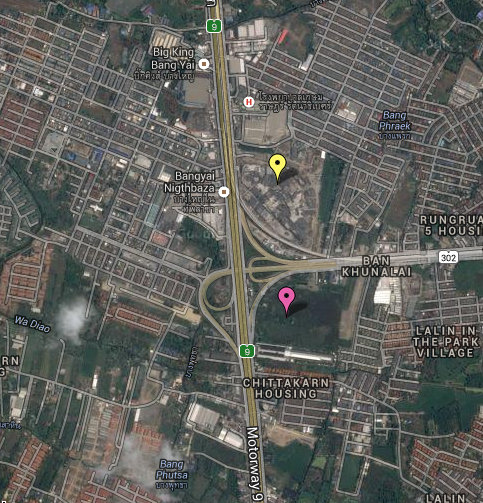