APUS Condominium Pattaya is a resort style condominium that will surpass the dreams of the most discerning buyer seeking that rare commodity – the perfect value for money combined with 5-star facilities. APUS is developed by APUS Group that is also behind Cetus in Jomtien. APUS is located in the heart of Pattaya City, just minutes away from what used to be Carrefour but now has been taken over by Big C Extra. We must not forget to mention that the famous Foodland Supermarket is also in the neighbourhood – open 24 hours. The Marketing Director for Apus back in 2010 was Jason Payne – yes, the same Jason Payne who is now Vice President of Tulip Group, Tulip Group that came out of nowhere.

There are two 7-storey buildings housing a total of 158 units all of which overlook the huge 300 sqm swimming pool and tropical gardens.

Rooms range from 34 sqm compact studios to luxurious 3-bedroom, 3-bathroom units – rooms are finished to the highest of standards using the finest materials and construction methods.

The Apus Condo Project was launched in December 2008, construction began in January 2009 and the project was completed September 2010. This a 560 Million Baht project. 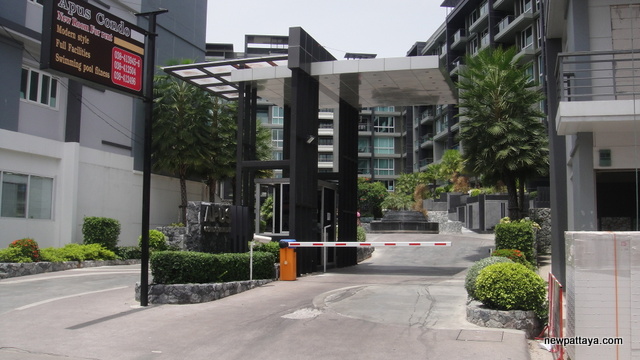