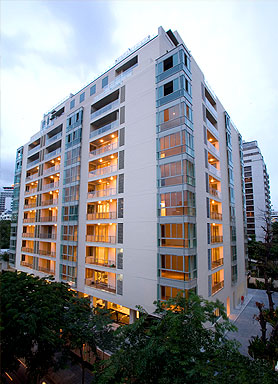 The Legend Saladaeng is a 14-storey condominium by developer Raimon Land.

The CEO Raimon Land in 2004 was Mr Nigel Cornick, in February that year he hired Bouygues Thai for the construction of The Legend which is a Grade A condominium development on Soi Saladaeng in Silom.

The project consists of 78 luxurious fitted 1, 2 and 3 bedroom residences in a prime central business district location in Bangkok. Prices at The Legend started from 5 million baht or about 70.000 baht per sqm. The units are varying in size from 66 – 140 sqm. There are 99 covered car park spaces.

There is a rooftop terrace with a 25 meter infinity edge swimming pool and fitness center.

The Legend’s architecture and interior design is by Steven J. Leach, Jr. & Associates, a company that has designed The River and Baan Plai Haad, just to name a few.

The project was pre-launched in Q4, 2003 and officially launched 18th February 2004. Construction started at the beginning of 2004 and was completed in the end of 2005.